This being a saxophone magazine, you may find it surprising to find a clarinet barrel review on these (virtual) pages. But how many of you saxophone players out there dabble in clarinet? Or are serious doublers? Some of you might even be a clarinettist dabbling in the world of the saxophone.

Well, Rovner sent over a barrel to the **Saxophone Life** office along with claims that this clarinet accessory is ‘Great for woodwind doublers when switching from sax to clarinet’. As a seasoned doubler myself, how could I resist a test after reading these claims?

On opening the box, the barrel is obviously made from a polymer material, with three rubberised rings making the usual tuning adjustments easy. It is, however, finished to look like wood and didn’t look altogether out of place on my clarinet.

The most obvious visible feature of the barrel was of course the rectangular bore; around a ratio of 3:5. ‘How does this work?’ I hear you ask. Well, the next item to be found in the Rovner box is a very lengthy and technical leaflet which I read a few times, each time slightly slower than the last. I am still, however, unable to make a summary of exactly what it said! The general claims were pretty bold:

I’m sure all these are on your current clarinet wish list (alongside more gigs and a perfect reed.) To find out if the claims were true I decided to take it to work for a couple of weeks.

My first port of call was the BBC Philharmonic. As I was playing saxophone, the clarinet section kindly agreed to have a go with the barrel.

After the initial intrigue, there was both positive and negative feedback, none of which was radical, ranging from ‘it makes the top end nice and clear’ to ‘the low register loses projection’. It could be said, however, that the players testing the barrel have no problems at all with their techniques – they are at the top of their game.

After listening to John Bradbury play the clarinet solo from Bolero using the barrel, I can categorically say he sounded pretty much as outstanding as he does on his regular one with his Buffet clarinets – there was no discernible difference in sound, in my opinion.

Later in the week I decided to try the barrel for myself. This meant borrowing a friend’s Buffet R13 as I found that the Rovner barrel didn’t fit my Yamaha CSG clarinets. (In this instrument the top joint is longer and the barrel is shorter than the more standard Buffet/Selmer shapes).

So, I eventually began to experiment. I have to say I was initially surprised. The sound was focussed and the clarity was excellent in the high register. It seemed to make a more classical tone with less effort in focussing the air.

I then played it in a bigger room. Here I found that when I tried to project the sound further at a louder dynamic level, the instrument seemed to lose it’s open sound, remaining quite small but still controlled. I imagine for close mic/pit work this wouldn’t be an issue, but it could be problematic for orchestral playing. I experimented with the barrel’s position, as instructed on the box, but for me this didn’t seem to make any discernable change.

If more even scales is about intonation, then I tend to think this is really in the hands of the player. I’m certain that no clarinet accessory will be a substitute for hours of long note practice with a tuner, or years of ear training and ensemble experience. 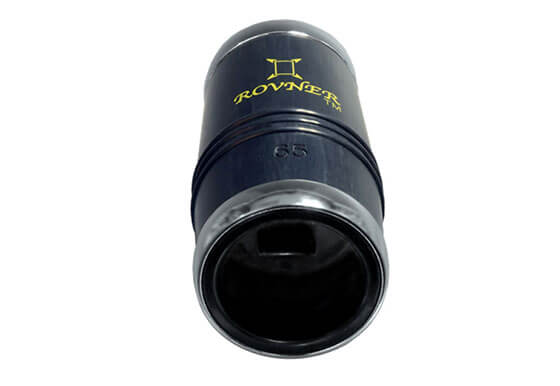 However, if you have problems with tuning, the different length barrels available from Rovner might help. For example, if you’re prone to playing generally flat, a short Rovner barrel will no doubt raise your pitch. Science is still unable to compensate for the loud=flat, quiet=sharp problems we all encounter as single reed players.

My final test was to try it in musical theatre. I asked my single reed colleague to have a play and also a listen. We were both doublers and were genuinely interested in this helping the problems of swapping between instruments in the orchestra pit.

“The articulation was responsive with less control from the air and embouchure”.

After a bout of saxophone playing we tried the barrel. I have to say there were small differences to the feel of the clarinet from a player’s perspective. Again, I felt there was less need to control the air column, which also meant the articulation was responsive with less control from the air and embouchure.

We also both decided as listeners, the difference in the dead acoustic of the pit was marginal- maybe a little thinner and less projected. Of course, we both decided a reed would have far more positive/negative impact on feel and sound than the change of barrel. I’d certainly pay the asking price of $119 for an everlasting perfect reed.

Overall, I decided the barrel has certain qualities which some players will enjoy. After trying it for a few weeks in different musical situations it certainly altered the characteristics of my clarinet. It is of course a matter of taste, just like your choice of instrument, mouthpiece or reeds.

This barrel will have different effects depending on your ability, as I found with the BBC Philharmonic section, and I would suggest the barrel is aimed at student doublers rather than high level professional players. It may change the way your instrument responds in different registers. So in conclusion, while this barrel will not eliminate all your clarinet problems, it is definitely worth a try.

Carl Raven teaches at the prestigious Royal Northern College of Music in England and is a member of the Apollo Saxophone Quartet.

We had some amazing players for the March Live Masterclass and discussed tone, technique and rhythm skills.

Why Playing by Ear is Important with Michael Lington

Smooth Jazz star Michael Lington explains why playing by ear is the ONLY way he learns music.

Ready to push your ear training further? This week in Sax School learn how to quickly work out 3 note patterns on your saxophone.