When it comes to recording yourself there are tons of options.

Contents hide
1 The Computer
2 The Software
3 Speakers
4 Audio Interface
5 The Mixer
6 Mini Keyboard
7 Coffee Cup
8 Other stuff:
9 Ok. So how does all this go together?
10 Other options
11 Final Thoughts

UPDATE: This is an older post and I have updated my studio since writing this. Still some great basic information here. Check out this review of my new sax mic the AKG C414XLS here.

It can be really confusing knowing where to start when you begin collecting recording gear.  In this article I want to talk you through my setup to give you an example of a very simple, but effective option.

This doesn’t look particularly glamorous (and no I didn’t really tidy up before I took this pic!) and yet, I have used this very setup to record my saxophone for release on some major USA TV shows (24, Medium, Bones) and on albums. Plus of course, the audio for all my lessons in Sax School.

In general terms, every computer based home recording setup needs to have the same basic elements shown in this picture.  Let me talk you through it.

I’m a mac user and the heart of my recording setup is a Mac Mini. It does the trick for me. Of course any modern pc or mac could also be used.  I like the Mac Mini because it’s pretty much silent and doesn’t take up too much space.  You’ll find with most laptops and tower computers you will get a fair bit of noise from the fan – this can be an issue when you’re recording.  The way around this is to try and keep your computer as far away from your microphone as possible.  Depending on your computer and room setup this can be tricky.

There are loads of options for recording software depending on how complex your requirments are.  Thankfully recording software is getting cheaper these days although you can still easily spend hundreds of pounds on it.  Music software is called your “Digital Audio Workstation” or “DAW” by those in the know. So, my DAW is Logic X.  Again I’ve used this for years and so have gotten to know it through it’s many incarnations.  It’s a complicated piece of software that will enable you to do lots more than just recording so unless you’re writing scores or recording albums you could use something more straight forward like Garage Band.  Other popular DAW software packages are “Sonar”and “Pro Tools”.

I use my recording setup for writing music as well as basic recording so I have a decent (but not too expensive) pair of monitor speakers.  You can spend as much or as little as you want on speakers and there is an endless array of choices.  Mine are Yamaha HS-50M studio monitors that I like for their small size and great sound.  The cheapest option for monitor speakers is to use hifi gear.  For me, it’s important that the monitors give me as accurate a sound as possible.  Professional monitor speakers have a very “flat” sound compared to hifi speakers for that reason.  They don’t colour the sound (extra bass etc) like some hifi speakers do.  There are plenty of monitor speaker options available second hand on ebay if you want to dip your toe in.

Now, this is an important piece of kit. The audio interface takes the signal from the microphone and turns it into a digital signal that your computer can understand. Like everything else, you can spend a little or a lot on one of these fellas.  What’s the difference?  Well, it all comes down to the quality of the signal conversion.

This is important because you only get one chance to do that conversion and if your lovely playing gets squashed up in the conversion process when it goes into your computer, you will be stuck with a squashed sound.  That being said, there are some decent lower end audio interfaces available.

The one I’m using is an “Apogee One” which isn’t super cheap but sounds great.

Actually there are two main considerations when looking at audio interfaces.  The first, as I’ve mentioned, is the quality of the conversion or the Analog to Digital (A/D) converter). The second is the number of microphones or instruments you can record from at once.  If you are planning on recording a full band then you will need many audio inputs to work at the same time.  That way you can record the singer, guitarist, sax player, keyboardist, bass player etc at the same time.

For most home recording setups though, you will mostly only ever record one or possibly two things at the same time.  My “Apogee One”, as the name suggests, records just one thing at a time. Which is perfect for me.

So to sum up, work out what you really need and get the best quality interface for that job that you can afford.

You may not need a mixer depending on what you plan to do with your recording setup.  For me, the mixer is kind of like the “Central Station” for all the sound in my studio.  The output from my audio interface goes through the mixer to my speakers so I can use the mixer to control the volume of the speakers.  I have some other gear in my studio like keyboards and and EWI (midi sax).  I connect the audio output from these to my mixer also to control the volume of the playback through my speakers.

If you are considering getting a mixer though, plan out what your actual requirements will be and get the smallest mixer that will do that.  I used to have a 16 channel mixer – meaning I could plug 16 different things into my mixer and send all their sound to the one set of speakers.  12 of those channels were never used!  I now have a 4 channel mixer that fits much nicer on my desk and works great.

My mixer is a Mackie 402-VLZ3 which is a really nice “pad mixer”.  There are a bunch of others on the market ranging in price from as little as about £80. 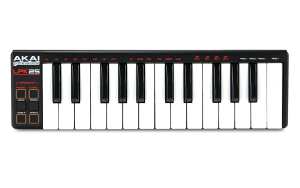 If you are just recording your playing you won’t need one of these.  I use it for quickly writing music and scores – it’s great.  Basically this is a “controller keyboard” or a keyboard that doesn’t make any sounds itself.  I like the way it fits on my desk and is nice and compact – like the rest of my setup.  I have a bigger keyboard for playing.

Yes, this is very important!

Now what’s not on the picture are my microphone and stand.  I have a Rode NT1-A microphone on a standard microphone stand. I like the sound of this mic – although it’s not the most expensive.  Like everything else, you can spend from £30 (wouldn’t recommend this by the way) to £3000 or more on a microphone.  The difference is quality of the sound.

I would suggest looking between £100 and £400 for a decent microphone. You can also find second hand microphones on ebay.  Like your saxophone, a mic can be with you for life if you find one you like and look after it.

A fantastic new and super compact wireless microphone I reviewed recently is the iSolo from CloudVocal. This is one of the new range of Chinese microphones on the market today that sound amazing for a fraction of the price we used to have to pay for this sort of technology.

Also, you’ll need a bunch of cables to connect it all together.  Your microphone will connect to your audio interface using an XLR cable.  This is a standard cable used in music.  Depending on your monitor speakers you may also use XLR cables to connect them to the mixer.  Alternatively you will need standard mono 1/4inch jack cables.

Ok. So how does all this go together?

Right, so there’s a bunch of bits here, and it can seem a bit daunting about how it all goes together.  The easiest way to think about it though is to consider the path of your recording.

It starts at the Microphone

travels to the Audio Interface

and into the Computer.

and then out to your Speakers.

Computer based recording is not the way to go about recoding yourself.  It’s really important to think about what you are actually trying to achieve with your recording setup.  A far cheaper solution is to use a handheld recorder.  There are a bunch of really good ones on the market. Check out the Zoom as an example.  These devices will record great quality sound straight onto SD card. They are ultra portable and simple to use.

I hope this have given you some ideas on how to get started building your own recording setup.  Remember the most important thing is to really consider what you are trying to achieve and just get the gear you need for that task.  Your recording setup can be as simple or as complicated as you choose to make it.  However, as a person who has spent many years making recordings and fiddling with gear, I would suggest you keep it as simple as possible and spend you precious spare time on playing your saxophone!

How to develop “Fake Confidence” with Derek Brown

BeatBox Sax guy Derek Brown is back for another incredible session. This time he is sharing solid gold...

Live #11 – A Blues Saxophone Warmup to boost your skills!

Learn a simple blues warmup that will boost your skills, plus lots more in this episode of Sax School LIVE.

Want to build a great tone on sax but hate BORING long tones? Check out these exercises that are fun (and will help you make MASSIVE tone progress!)