One of the best ways to learn and create your own playing style is to check out some great saxophone players.

By taking the time to listen to as many great recordings from great saxophone players as possible, you will start to get an idea of what style of playing you like.  Whether you play alto sax or tenor, or even soprano or baritone, we’ve picked some sax legends to inspire you.

The next step of course is to try to imitate their style and sound.

Here are just a few great players as a starting point: Johnny Hodges was  Duke Ellington’s lead alto sax player and section leader for many years and one of the most awesome big band alto saxophonists.  Hodges has a great sound on alto and is famous for his note bends and wonderful vibrato.  He also has an amazing sense of rhythm and melody.

Great track: All of Me – Duke Ellington, the great Paris Concert Charlie Parker was one of the most influential musicians and best jazz saxophonists of all time. Parker played a leading role in the development of Bebop style which came about in the 1940’s.

Albums to check out: Now’s the Time – The Quartet of Charlie Parker – Verve

Get FREE saxophone resources – inside Locker A very exciting and energetic alto saxophonist, Cannonball Adderley was famous for playing with the Miles Davis sextet and on the immortal album Kind of Blue.  Adderley also had great success with his own Sextet featuring his brother Nat on trumpet. Check out this transcription of his iconic solo on “Groovy Sambas”. 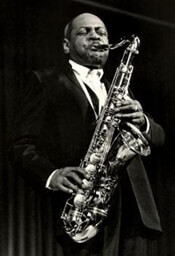 Coleman Hawkins is often credited as the first really important jazz musician to play saxophone. He has a beautiful lyrical style with an amazing swing feel. Checkout his playing on Body and Soul for a masterclass in melodic playing.

Albums to check out: Body and Soul: The Genius of Coleman Hawkins
Get FREE saxophone resources – inside Locker Probably one of the most famous and influential saxophone players in the jazz world of all time, John Coltrane changed the direction of the jazz scene with his approach to improvisation and jazz harmony. John Coltrane played and recorded with Miles Davis in the 1950’s then further developed his own modal jazz free style through the 60’s with his own group.  There really are loads of amazing albums to check out here – get comfortable! Although Getz developed his playing style performing throughout the 1940’s  with Nat King Cole, Jimmy Dorsey and Benny Goodman, his Bossa Nova recordings from the 1960’s are by far his most famous. Getz won Grammy awards for his tracks Desafinado and The Girl from Ipanema which were massive million selling hits and have become standard jazz tunes played everywhere. Paul Desmond is probably most famous for his playing with the Dave Brubeck Quartet and their greatest hit “Take Five”.  Desmond had a distinctive airy smooth sound on his alto which stood him apart from his contemporaries and helped to define the “West Coast Cool Jazz” style of the 1960s.

Albums to check out: Time Out (Columbia)
Get FREE saxophone resources – inside Locker King Curtis is often thought of as the first R&B or Rock and Roll sax player.  His raw and energetic playing has been an influence for many great players who followed him. Check out his amazing playing with Aretha Franklin on her Live at Fillmore West album. Sam Butera was most famous for being Louis Prima’s sax player for many years.  He is one of the best players to check out for the 1960’s R&B / rock and roll style of playing.  A wonderful musician and a great entertainer. There would be few young jazz saxophonists these days who aren’t influenced by Michael Brecker.  He is regarded as perhaps the most influential saxophonist since Coltrane.  Brecker’s playing spanned the jazz and pop worlds. He was a prolific pop session player and appeared on more than 700 albums. Brecker also left behind a massive catalogue of jazz albums and his sound and incredible technique inspired a generation.

Albums to check out: Michael Brecker (self titled) Two Blocks from the Edge (check out Delta City Blues) with Steps Ahead “Live in Tokyo 1986) Now you See It Now You Don’t “The Birthday Concert” with Jaco Pastorius Big Band No list of jazz saxophone players to check out would be complete without the man who recorded “The Pink Panther”!  Plas Johnson.  Since the 50’s Johnson has been a prolific session player in Los Angeles and has recorded with innumerable stars. The Pink Panther theme is one of the most widely known sax solos.

Albums to check out: Rockin’ with Plas  (Capitol) Mondo Hollywood Ultra Lounge (Pink Panther / It Had Better Be Tonight)

Widely considered the founder of the Smooth Jazz movement, Grover Washington Jr wrote and recorded some tracks that have become lasting hits.  Grover was a great melodic player. He had great commercial success with his albums – Just the Two of Us from the album Winelight reached number 2 in the US charts.

Albums to check out: Winelight (Just the Two of Us) Mister Magic All My Tomorrows 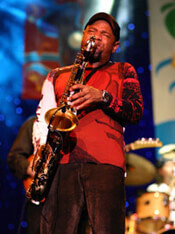 Kirk Whalum was Whitney Houston’s sax player for many years recording the sax solo on her song “I Will Always Love You” featured in Bodyguard.  Kirk has a huge sound and his expressive soulful playing has in my opinion set the standard for commercial pop and smooth jazz playing.  He has recorded a load of his own albums that are a must to check out for this style of playing.

Albums to check out: The Promise Joined at the Hip (With Bob James) Roundtrip Gospel According to Jazz Vol 3 Sanborn defined the sound of crossover jazz / pop in the 80’s.  He is another seriously influential player.  Although often thought of as one of the first Smooth Jazz musicians, Sanborn is perhaps more accurately classed as a soul jazz/fusion player.  He was one of the most commercially successful sax players in the 80’s – he played sax solo on the “LA Law” theme song (if you remember that one!) and even hosted his own music program in the late eighties.

Albums to check out: Voyeur Straight to The Heart Kenny G is the biggest selling instrumentalist of all time, with more than 75 million albums sold around the world. Impressive! Kenny G really defined the modern Smooth Jazz sound.  He may not be your favourite player but definitely worth checking out.

Albums to check out: Duotones 1986 Breathless 1992 Heart and Soul 2010
Get FREE saxophone resources – inside Locker Since the 70’s Clemons has been a member of Bruce Springsteen’s E St Band and has also recorded the solo on “Freeway of Love” by Aretha Franklin.  Clarence Clemons follows on from the style of King Curtis and is a great pop growl player to check out.

Albums to check out: A Night with Mr C Freeway of Love (with Aretha Franklin)

Other great saxophone players to check out:

Ready for some fresh new saxophone music? Check out our roundup of some of the new sax music...

Get these improvising tips on sax

Ready to make your first steps with improvising on saxophone? Check out this lesson!

Intonation and your ideal sound

One of the most satisfying musical experiences is listening back to a recording of yourself and hearing your...