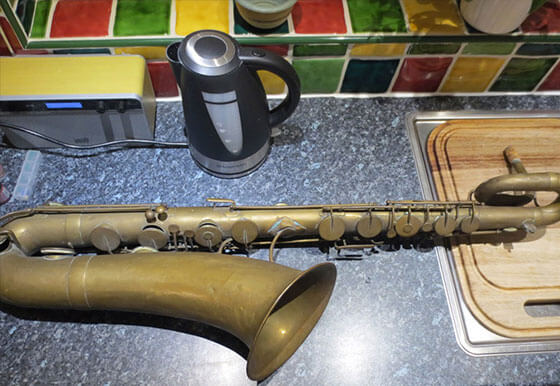 Contents hide
1 It’s weird to think that saxophones were being made before Edison even invented the light bulb.
2 The instrument
3 The restoration

It’s weird to think that saxophones were being made before Edison even invented the light bulb.

In fact, Paul Firmstone’s vintage Baritone Saxophone was made 20 years before Edison filed his patent. Built at the original Adolphe Sax factory in 1858, this bari is one of the earliest examples around being built just 12 years after Sax filed his original patent for the instrument in 1846.

“I first discovered this horn on eBay France,” says Paul, who has been playing and collecting woodwind instruments since 1992. “There aren’t many of these original Adolphe Sax instruments around and I was keen to get it although I knew it would need a lot of work.”

Luckily for Paul, his friend Roger is a talented repairer with 20 years experience as a metallurgist! Together they have been tackling the huge job of bringing this historic sax back to life.

Paul’s baritone sax was made by the Adolphe Sax factory at Rue Saint-Georges in 1858. “It actually has an inscription on the bell saying “baritone saxophone in Eb” says Paul, which is a good indication of just how new this instrument was at the time.

“We managed to work out the manufacture date from the serial number,” he continues. “Back then, the baritone was expected to be more popular than the tenor sax and they were used in the French military bands.” 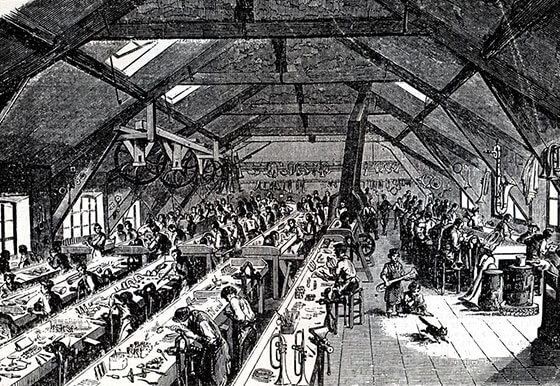 Saxes from this period have a simpler key mechanism along with other design differences from modern horns. One example is the octave mechanism. “There are two octave keys for the left thumb on this sax,” says Paul. “My horn was made before Selmer designed the automatic octave mechanism we see on all modern horns, so the player has to switch between the octave keys depending on how high they are playing.”

The bell on this bari measures 200mm in diameter making it much larger than modern horns. Also, although it only goes down to low B, the tone hole for the the lowest notes are placed on the top of the bell unlike modern horns with tone holes on the side of the bell.

When the saxophone arrived it was clear that it had been neglected for a long time and was probably destined to hang on someone’s wall. “I wanted to restore the sax to ‘as new’ condition,” says Paul who along with Roger has already spent a lot of time stripping down and rebuilding the instrument.

“The bottom bow of the sax was pretty much destroyed when it arrived,” says Roger. “We had to completely rebuild this section – there’s no way you can order a replacement!”

“The challenge with this being such an old horn is to rebuild it in a sympathetic manner,” explains Roger, who has had to reconstruct the bottom bow, and key guards. The bell also needed a lot of attention and now looks as new. 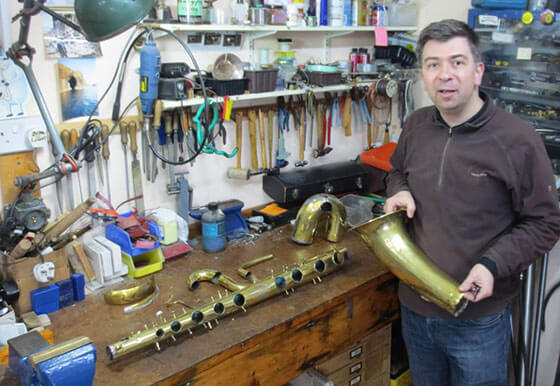 Paul with the Bari stripped down and ready to rebuild

One of the challenges with instruments of this age is the tuning which didn’t get standardised till after the Second World War. “I expect this sax to be tuned slightly sharper than modern horns but it will be exciting to find out!”

Although still a couple of weeks away from completion, Paul’s antique Bari is already looking amazing. “We wanted to bring this instrument back to the condition it was when it first left the factory,” says Paul. “The really exciting part though will be playing it for the first time.” 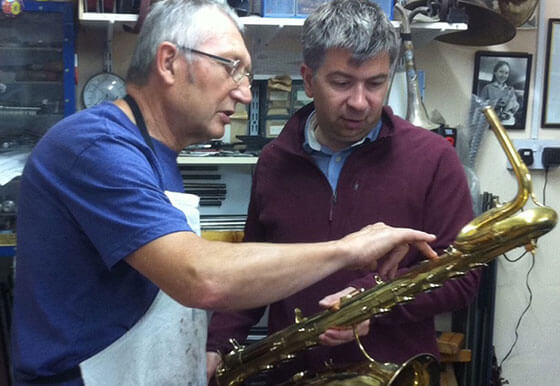 You Were Always On My Mind

I made a lesson recently on this classic tune recorded by “the King” Elvis Presley. Check out my version on tenor sax.

Just starting with improvising? This easy improvising jam session for saxophone will get you swinging with just 4 notes, but sound amazing!

Want to build a great tone on sax fast? Check out these amazing “mouthpiece practice techniques” from Carl Raven!